Started by researchers such as Dr. Hulda Clark and Dr. Rife the Zapper has now taken a further step forward through natural health professional Alan E. Baklayan and his intensive study of frequency and bioresonance applications for wellbeing - the Diamond Shield Zapper IE with microcurrents and EMS with elaborated wellbeing programmes according to Dr. Clark, Dr. Rife, Dr. Beck and naturopath Alan E. Baklayan was created. The Diamond Shield Zapper with micro currents not only improves the existing Zapper opportunities, but entails even completely new application forms. We are daily exposed to thousands of external pathogenic influences which constantly weaken our vitality and health. In order to counter this impact, the Diamond Shield is ideal!

NEW: Video Tutorials for the use of the Diamond Shield Zapper

From now on, extremely helpful and supportive tutorials on the application and use of the Diamond Shield Zapper are available on YouTube.

Be sure to check it out!

Videos about the Zapper 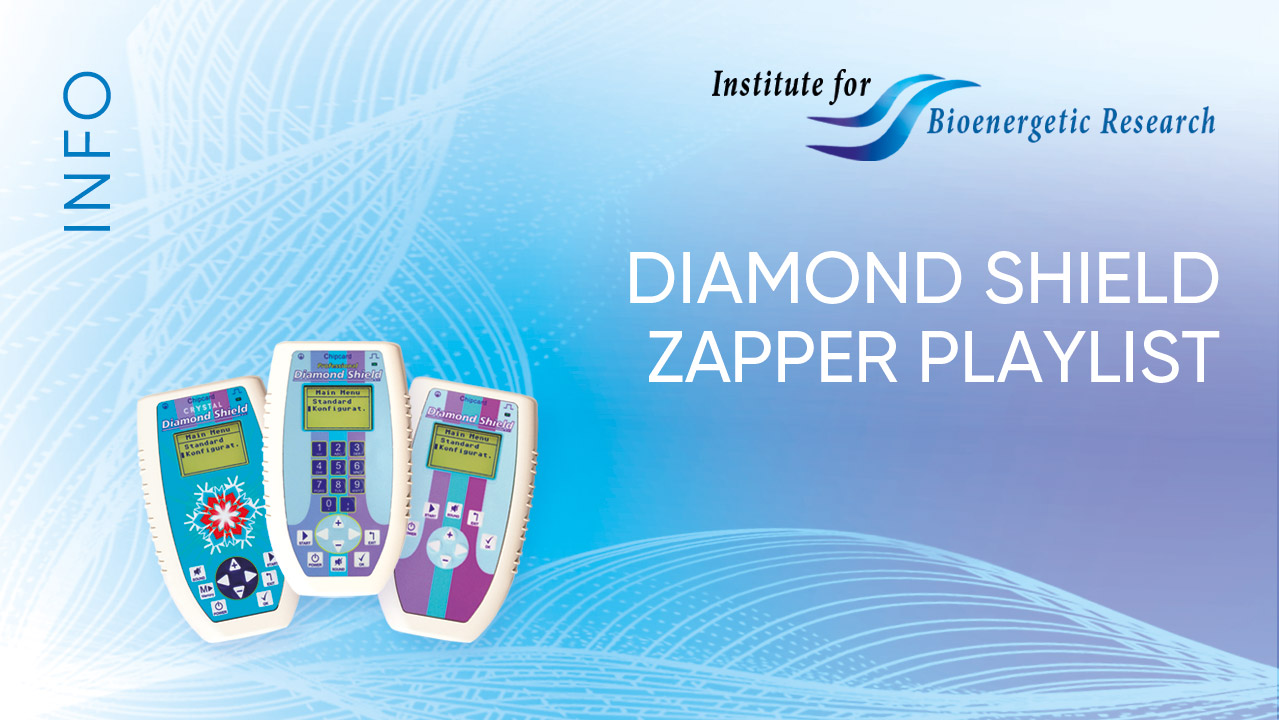 The Diamond Shield Zapper in presentation

What is a Zapper actually?

A zapper is a hand-held device that passes weak electrical current at specific frequencies through the body via two electrodes for improved physical well-being and relaxation. Naturopath Alan E. Baklayan took zapper research further to today's revolutionary Diamond Shield with microcurrents + EMS, which has considerable innovations and improvements.

This handy little device is used to support the body's self-healing powers and is absolutely unique in the field of frequency application.

More about the Diamond Shield Zapper 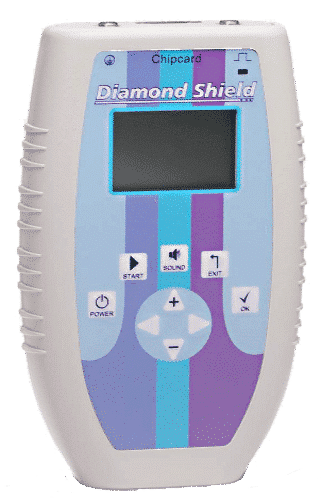 We support the concept of Healing Frequency - the free online library and software for the individual creation of chipcards. Here all available frequencies of Baklayan, Clark and Rife frequencies are included.
More about Healing Frequency
There are over
0
chipcards with which you can expand your Zapper

Upcoming events on frequencies, chipcards and more that might interest you:

For people interested in zappers, beginners and advanced practitioners

A zapper is a handy device that conducts weak electrical current in specific frequencies through the body via two electrodes to improve general well-being. Important researchers in the field of frequency technology include Dr Hulda Clark, Raymond Rife, Dr Beck and Hp Alan Baklayan.

Experienced, trained therapist Hp Axel Forstner will answer all your questions about treatment with the Zapper.

(Next date to be announced soon) Naturopath, coach and entrepreneur Bernhard Sattler regularly offers the free webinar "Introduction to the Healing Frequency Online Library and Software".

The Healing Frequency offers a great enrichment for every zapper user, because here you can create your own individual chip cards for Diamond Shield and Biowave Zapper.

Naturopath Sattler is happy to provide a comprehensive insight for all Healing Frequency newcomers who would like to get to grips with the system or simply have questions about how to use it, as well as those interested in finding out if it is something for them.

If you want to understand the universe, think in terms of energy, frequency and vibration! Nikola Tesla

How exactly does it work?

What is the basic idea behind the zapper? What do you need it for and what can it do?

We strive to fulfill two principles: regular discharge and a healthy shield.

Why is this so important and how can the zapper help? 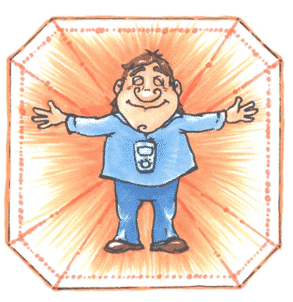 Welcome to the Institute for Bioenergetic Research Beirut/Lebanon

Bioenergetic Research is a non-profit organization dedicated to research, dissemination and information on frequency therapy in all its forms, such as electrical, electromagnetic, music and colour therapy, and publishes this work.

This page is intended to inform the public about the incredible possibilities of all these forms of therapy.
The recommended applications can be performed with any commercially available frequency generator that has the necessary sophisticated technical features, or with specialized automated equipment on the market.
The Institute is particularly concerned with the research work of Hp Baklayan Munich, Dr Clark, Dr Rife, Dr Beck and many other therapists dedicated to treatment with these technologies.
Statements, research findings and recommendations on this page are exclusively from the Bioenergetic Research Center working group. These statements are in no way related to the intended purpose of the respective frequency generators, magnetic field, music or optical instruments or their manufacturers.
These research findings are not scientifically and orthodoxly recognised and should in no case replace diagnosis and treatment by a therapist.

I would like to thank Mr Baklayan and the team at DermaVit and congratulate them on the Crystal programme. I had some uncomfortable breathing problems and just didn't know what to do anymore. However, since I have been using the Crystal programme regularly, the feeling of tightness when breathing has disappeared. The Diamond Shield programmes, followed by Feel Good and then Relax - which I use every day before I go to school for work - have actually changed my life. I always set my alarm a little earlier so I can use the Crystal programme 2 times - this has been the solution to the panic attacks I've been getting since my transition into menopause. And if I don't have time to run the programmes before work, I take the zapper to school and use the programmes at break time. Since you told me that these three programmes would help me together, not a single day goes by that I don't use them. Since then I don't have to take any tablets against the anxiety and panic attacks anymore. Kind regards

August 2013, I suffered a rather deep cut/plaque wound on my right index finger. In the same month, I was attacked by numerous (10-15) mosquito bites in one evening.

In early September, I was cleaning a rather large fish tank. A few days later I noticed severe joint pain and an increasing stiffness of the fingers in my right hand. Medical examinations specifically in the direction of rheumatism/arthritis brought no results.

After several fingers on my right hand turned dark blue, my family doctor referred me to vascular surgery. All the examinations I had, such as ultrasound, MRI, CT and several blood tests, were inconclusive. For two weeks I received a continuous infusion of prostaglandin and heparin. Again, there was no significant improvement. I refused a proposed sypathicolosis treatment.

In mid-October I had another appointment at the alternative practitioner's practice where I had already been treated for some time for another matter. After a thorough examination, I was diagnosed with a heavy Borrelia burden and a bacterial inflammation on my right arm.

The special thing about this device is that it has a special programme against Borrelia. So I now began to target my symptoms with the Borrelia programme.

Immediately after the first treatment, my body reacted with considerable discomfort, which only subsided a few hours later. Through regular treatment with the zapper, my symptoms improved considerably after a very short time. The blue discolouration of the fingers slowly subsided and the pain also decreased.

I am very grateful to my alternative practitioner for the diagnosis and subsequent treatment. And I recommend the Diamond Shield Zapper to everyone, and not just for Lyme disease.

My wife and I use it daily and are grateful to have it.

Never again without my zapper!

I have been suffering from diabetes for a few years now and have of course tried all kinds of remedies, but unfortunately they didn't really show much improvement. I was really starting to despair, so I had already prepared myself for the worst:

One day, I went to my alternative practitioner because of recurring colds and when she recommended a zapper for frequency therapy at home, she casually mentioned that this type of therapy can also be used to support diabetes. On her recommendation, I decided to buy the Diamond Shield Zapper from dermavit because I found the grounding function very interesting. There is a programme for diabetes on a memory card. I ordered it at the same time.

Ordering and shipping went without a hitch and when I was finally able to hold my zapper in my hands, I was more than curious to see how "IT" would feel. No sooner said than done. I made myself comfortable in my chair, inserted the diabetes programme card and started the programme. After only a short time I could feel a deep relaxation and my general condition improved immediately. Not least because of this unbelievably great side effect, I now ran the zapper every day.

A few weeks later, when I went to my internist's office for a blood test, I couldn't believe what he told me: my blood sugar levels had dropped to such an extent that he couldn't explain it himself. He looked at me questioningly, but instead of telling him about my little "miracle Diamond Shield zapper", I smiled and sat back satisfied.

The daily application is really quite simple and that is certainly not a matter of course for me, as I am actually a rather technically untalented person...

After asking a nice lady from Dermavit, I received all the technical information about the device itself and, on top of that, lots of tips and advice on what to look out for during use.

I am really more than happy to be the owner of this little technical wonder!

A therapy trial with the Diamond Shield Zapper on one of our ponies showed me that it is possible to treat horses with the DS Zapper. Apparently, the same or very similar microbes that are effective in humans also lead to the same symptoms in animals.

My report on the attempt to use the Plate as an electrode for equine therapy:
Have used the Plate as electrodes for equine therapy. After it became clear that therapy aids like the Plate electrodes had to be fixed very firmly to the horse, we - the riding instructor and I - fixed the Plates under a lungeing belt. This strap ran down the sides of the horse directly behind the withers (on the back) and was fastened at the bottom of the front belly with the strap buckle. Under this belt I clamped a plate wrapped in absorbent paper at the side - quite far down. Of course, ampoules cannot be clamped here. The skin was also moistened down to the skin at the plate contact points. The DS zapper then also reported good contact. The 10 cm wide lungeing girth had five metal loops, one at the top and two at different heights on each side. Our DS zapper was placed in a small pocket on the upper eyelet. Then, as the first therapy, I started the basic 'DS' programme on our constantly coughing grand pony lady Zara. We watched with excitement how Zara would react to the therapy stream. The little horse also observed everything we did very attentively, so that we eyed each other. After a vibration full of trust filled the box, I ran the BiBlo, DTX, cold and flu programmes after the DS programme, each after short observation breaks. In between, I 're-moistened' every now and then. Our pony lady showed no displeasure about the procedure during the whole therapy, only the cough disappeared after some time - what a joy. But, would it last, even overnight in the paddock? Yes, it lasted. The next day, everything was repeated again and, as the riding girls told me later, they soon had fun again with Zara, who continued to be cough-free, much to our delight.